So after spending a few hours in Stone Town we decided it’s best we stick to the plan and rent a car to drive around Zanzibar. After some deliberation and guidance from the invaluable Lonely Planet, we headed towards the south / east parts of the island.

A cool sign at a wildlife park we stopped by on the way. 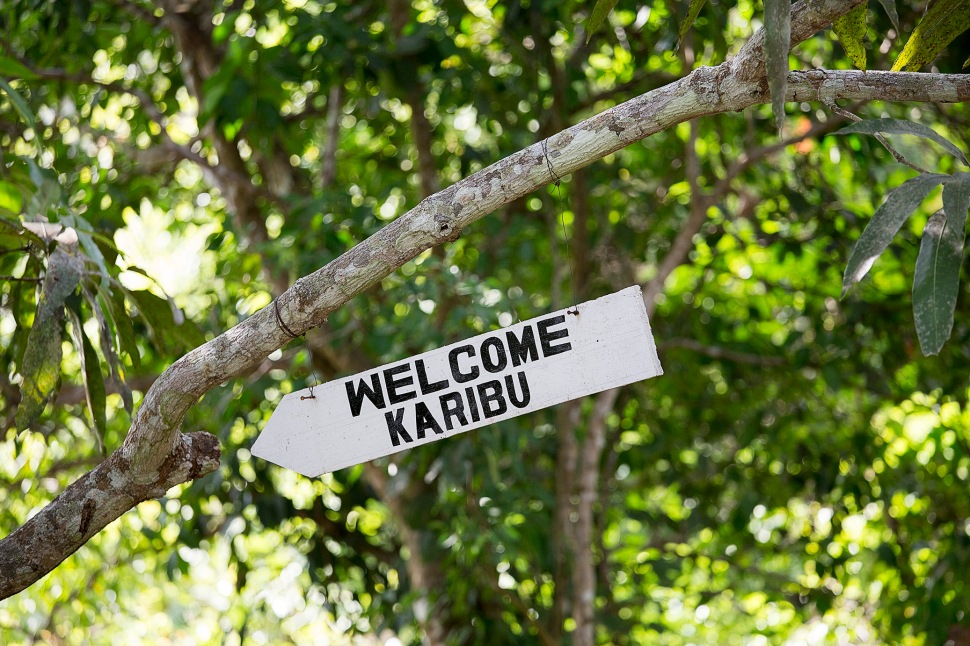 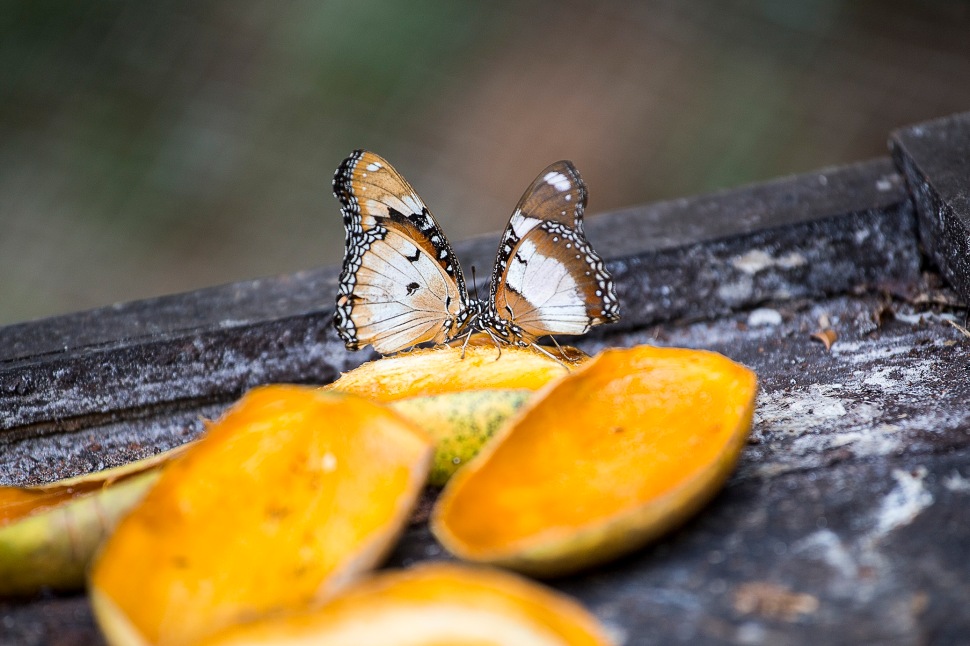 Gravity is for the weak of mind!

We bumped into some monkeys as well. And by bumped I mean we spent quite a bit of time looking for them 😉 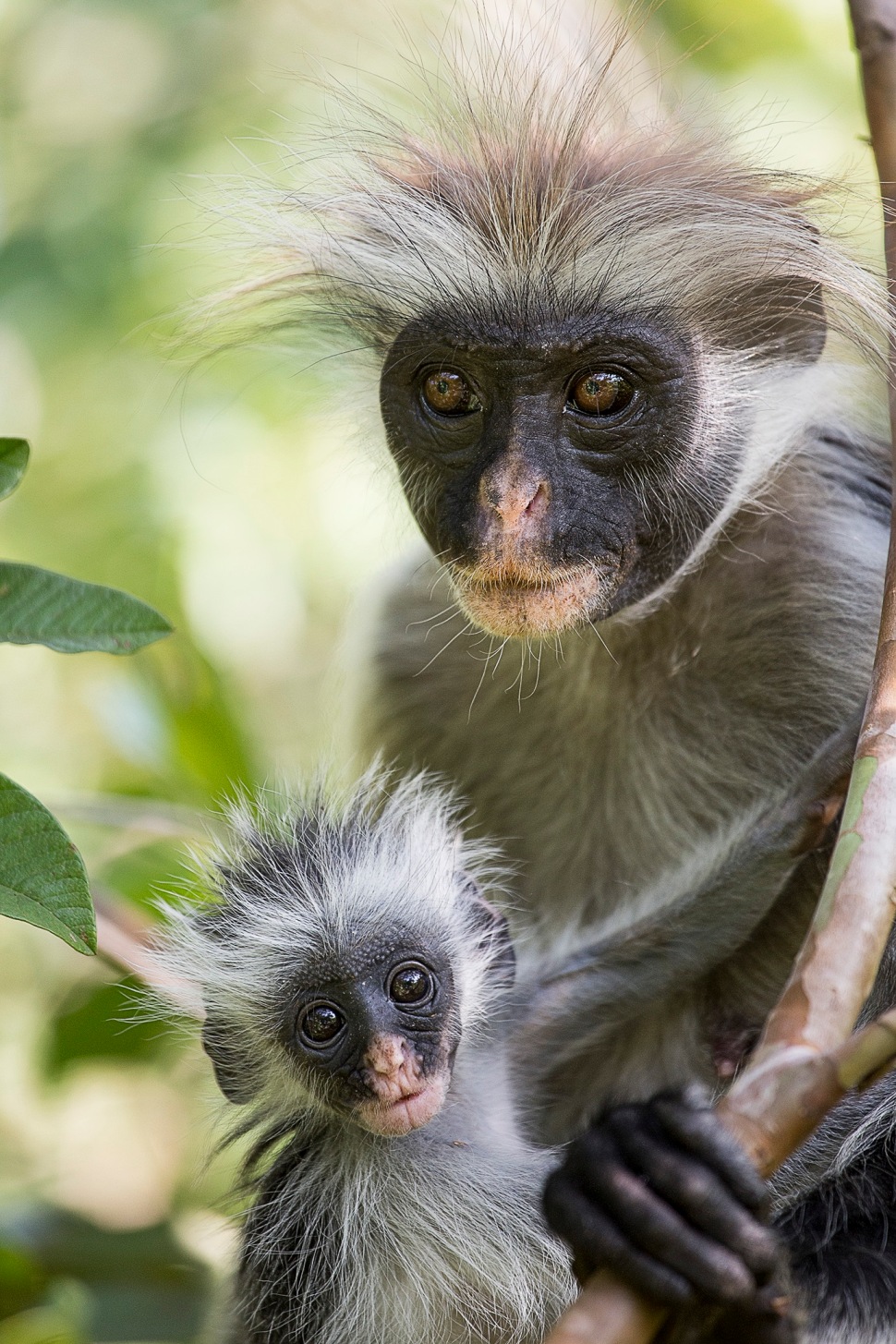 One of my absolute favorite shots of the trip that I’ve shown before, but couldn’t resist posting again.

After the wildlife chase (and chase it was, finding those monkeys took some effort!) we headed towards one of the many hotels on the east coast of the island that we’d read were less popular with the crowds and found ourselves here, near the Coral Rock hotel beach.

The strong winds on this side of the island make it an ideal spot for kitesurfers. 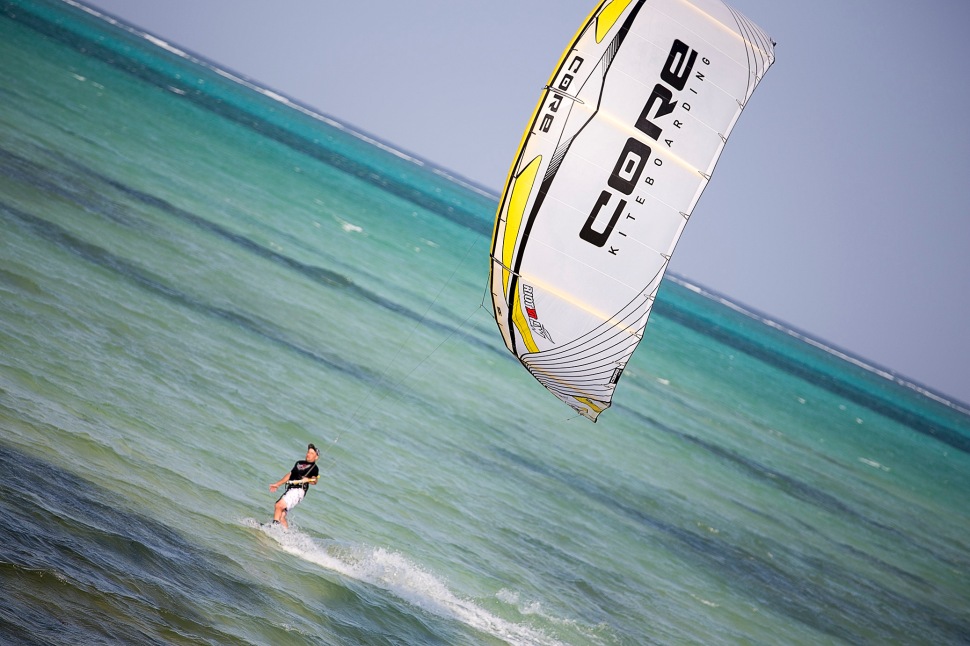 The Coral Rock itself, the restaurant where we had dinner. Good food, great view, only a handful of people… what’s not to love 😉

Not sure what this guy was making, but it looked cool.

The local kids enjoyed getting tourists involved in their games.

This guy knew how to flirt with the camera 😉

It’s incredible how little you need to create a game and have fun when you don’t have all the spoils of the “western world”… they looked just as happy despite literally living in shacks 15 meters away from the super luxurious hotels on the beach. It’s a strange place Zanzibar, let me tell you.

The infinite pool view was quite something else.

The room we got was pretty great. Normally it would have cost is $150 or so per night, but due to Metodi’s negotiation skills in German and my big ass camera we were able to get a discount to around $80 or so — we basically said we work for a travel magazine and would promote them in it, which I guess is somewhat believable 😉

Before dinner I was able to go out and do some long exposure shots without being disturbed… the results I’m quite happy with!

Lots of seaweed left over from the previous tide I’m assuming.

Beckons you to go for a dip, doesn’t it? 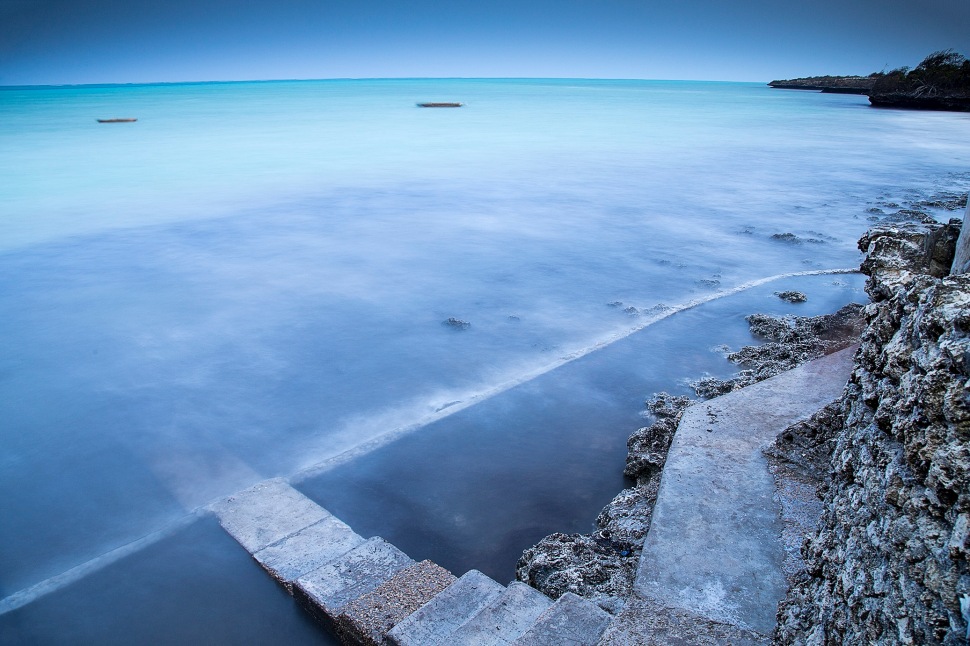 The infinity pool as seen from another angle.

After the long day behind us, it was time to kick back and grab a cold beer. You know what they say about this one? If you can’t climb it, drinks it 😉 Turned out that we can afterwards, but nevertheless we enjoyed the beer.

Another favorite shot, the mood and lighting in the restaurant were just great! Quite romantic… too bad there were no single ladies for Meto and I to chat to 😉

Already having established a good rapport with the hotel manager with our photo story from earlier, we were invited to go to a friends only party on the northmost tip of the east coast of the island. We took our car, but most people used a shuttle (if I can call it that) which drove them to the place and nobody seemed bothered by how this guy was sitting on top of the mini bus at 80km/h… 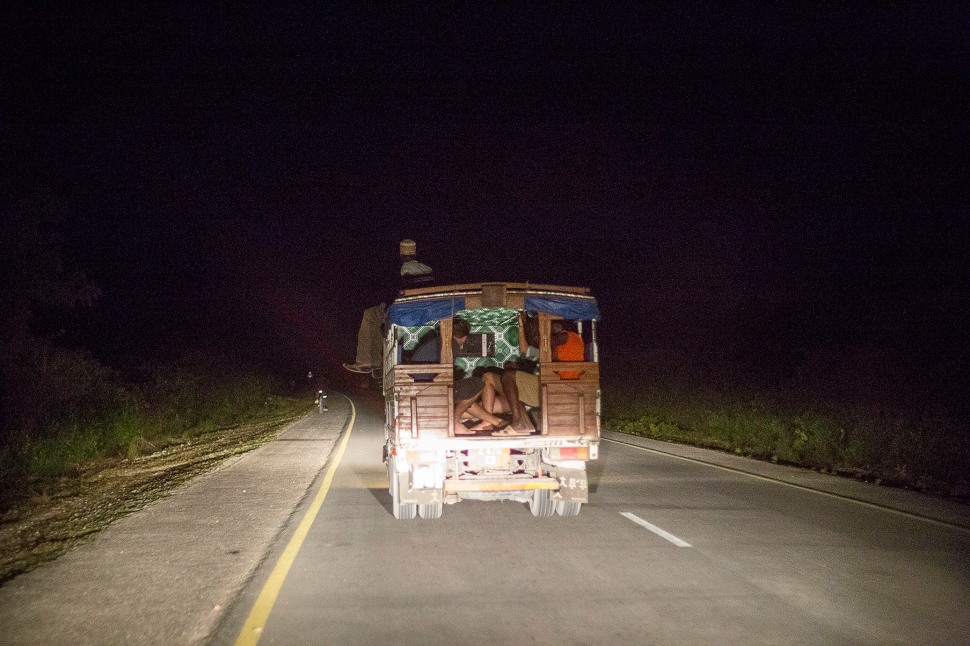 Getting there we realized it will be a cool party… 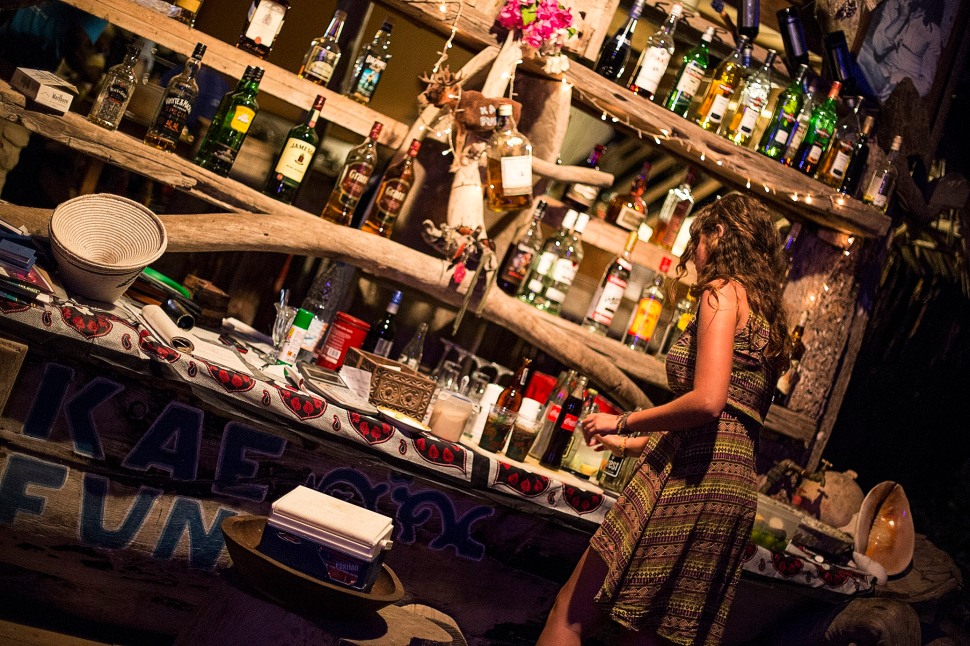 … with plenty of expats who live in town and wanted to have some chill / down time. 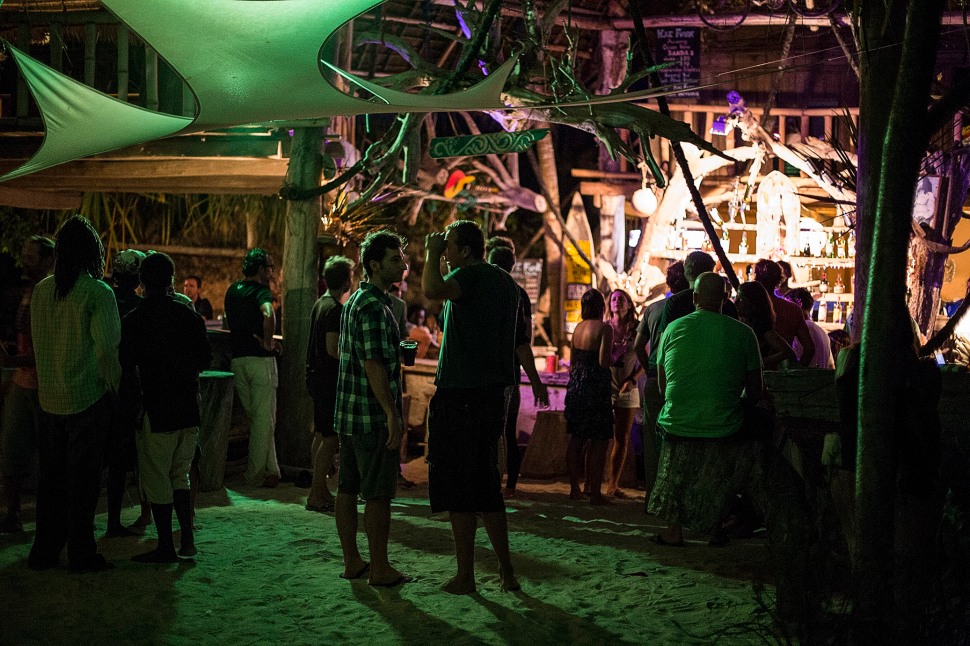 Not an atypical sight — a crab walking amongst the people at the party 🙂 There were a couple of drunk assholes who were considering toying with it, but a firm request not to touch it had them convinced to let it be. 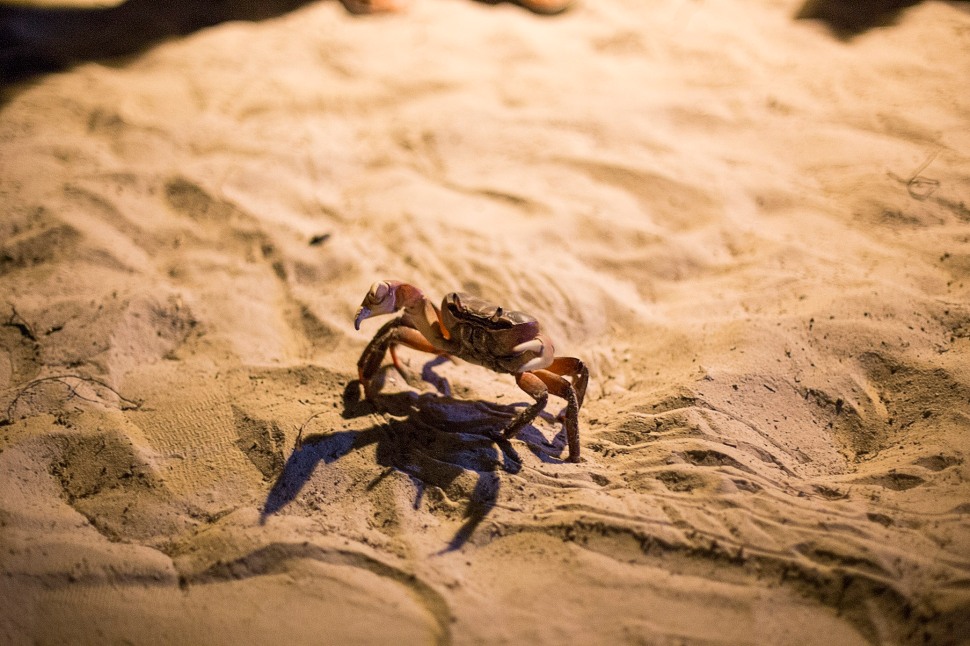 Somewhere around 1am we decided to head towards the nearby beach and get knee-deep in the Indian ocean. Little did we realize that because of the low tide we could in fact walk several hundred meters out into where recently there had been quite a bit of water. The sand underneath our feet was so fine it felt like sticky clay and there was no moon to guide us which made the whole thing seem like a mini adventure.

The handheld shot I took is at extremely high ISO with literally no light around which explains its poor quality (left the tripod at the hotel, you can’t believe how mad I was with myself!), but it serves to remind me of that amazing moment where we stopped and looked back towards the beach and the party a few hundred yards away, listened to the great music in the distance and enjoyed the stars, the cool evening breeze, and the water & sand at our feet. What a way to end the day!